This is a famous and prosperous shrine sited at the top of a little hill south in Akasaka, Chiyoda Ward.  It is in the area of the Imperial Palace and a short distance from the National Diet Building. You can easily walk to it from Kokkaigijidomae Station which you can access by metro on the Marunouchi, Chiyoda, or the Naanboku Lines.  This shrine was established in 1478 by the lord Ota Dokan and it is dedicated to Kawagoe Sannou-sha Shrine as the guardian deity his land of Edo.  The shrine was moved to this current location in  1659 and was rebuilt in 1958 after being destroyed in WWII.  Hei Jinja hosts the Sanno Matsuri, one of the three big matsuri for the Tokyo area that is held there in June on even numbered years.  Several national treasures are stored here, including the "Itomaki-no-Tachi" long sword.

I tend to visit shrines first thing in the morning as one of my first stops as stores and museums don't open until later in the day and they are less crowded earlier in the morning.  This is a very pretty shrine, there are well built, concrete outbuildings, and it is well maintained.  The front entrance is up large wide stairs (remember the centre is for the gods to walk), with the Saki cask offering wall off to the side of the front entrance to the Shrine proper. 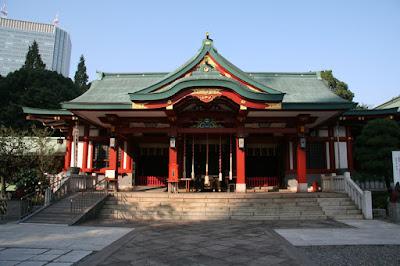 What is really neat about this shrine is the back way up as there are dozens of small red torii gates on the stairs up.  It is very pretty and picturesque.  The shrine grounds are surrounded by urban buildup, but it doesn't detract from the site itself.