Seeing lots and lots of robots was one of main reasons for visiting Tokyo again.  There were giant, 1:1 scale robots from anime to totally real and functional robots at IREX to see on this trip.  The robots showed high-technology at work, science fiction anime realized into physical form, while later visits to the Tori-no-ichi festival and ancient shrines and temples showed the rich cultural traditions of Japan.  It was a really interesting trip from all of these perspectives that was wrapped in excellent food and hospitality.

The International Robot Expo (IREX) is a big robotics trade show that is held every two years.  Japan provided 52 percent (150,000+ robots) of the world's industrial robots at the end of 2016.  Most of the robot vendors were from Japan (which is pretty impressive as there were almost 2800 booths operated by some 600+ companies), with a smattering of other countries there.  ABB robotics from Switzerland, for example, showed off their latest robot arm that was very dextrous and it acted as a bartender pouring beers from bottles for customers as a simple demo.  The Toyota HR-3 humanoid robot was also pretty cool and it is primarily tele-operated remotely by a human, something that could be very useful in many situations.  Japan also has a declining population (some 2000 workers retire from the workforce every day right now) and robotics are increasingly being adopted to help out in industry.  As a last minute update, I read that just over 130,000 people attended the event that ran for 3 days from November 29 to December 1, 2017.
The robot show was fascinating.  The sheer size of the show and number of manufacturers and robots really struck home how far robots have come.  Tesla car plants are just the tip of the iceberg.  The future is here now and many jobs are never going to be done again by humans at any large scale.  The robots can obviously do the car assembly, product assembly jobs, but they sort and sift, categorize, and do precision work such as assembling circuit boards and electronic devices too.  Not only that, they can now do fine motor skills work like picking ripe strawberries, picking up a piece of lettuce to assemble a sandwich, pour a beer, and flip burgers.  The prices are dropping.  Tens of thousands of dollars gets you one of the smaller robots.  I can't see mom and pop shops adopting these yet, but any mid-sized company with production lines that wants to grow in size doesn't have to hire more people to do it any more.
The next stop was back to Diver City which we passed by on the train on the way to the expo.  Here, the brand new RX-0 Unicorn Gundam was on display out front.  The Unicorn Gundam replaces the old RX 78-2 Gundam from the original Gundam anime.  This Gundam is slightly taller and larger than the original Gundam there and stands at 19.7 metres (64.7 feet) in height, but it also transforms into Destroy Mode by activating the Psycho Frame where it moves parts and glows bright red.  It is a very cool, very big 1:1 scale giant robot statue.
Not only was there a giant Gundam robot out front, the Diver City Mall was also running a Gundam Docks event.  This means there were Gundam displays and art all over the mall.  Gundam-mania for sure. 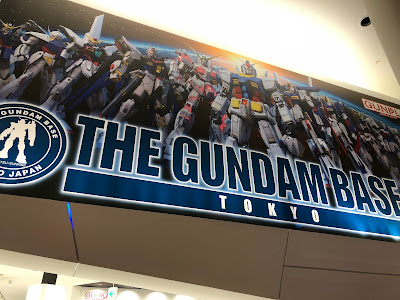 Diver City is a pretty nice mall with some great gift shops on the main floor along with a very nice food court.  The upper floors have some nice restaurants and even a McDonalds if that is what you want.  The conveyor belt sushi place is quite nice too.

Later on, I also saw Sony's new Aibo.  They're relaunching the robot dog as an even cuter little companion robot.  This display was down at Shinagawa Station.  There are robots everywhere (I exaggerate, but I sure kept finding them). 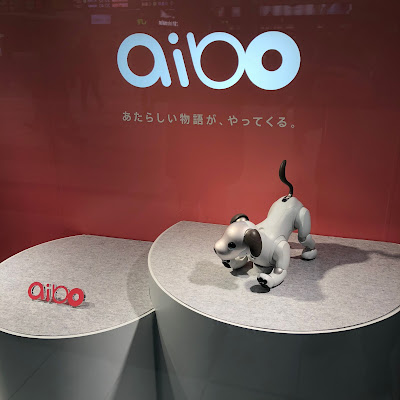 Thats all for IREX and the giant Gundam at Odaiba.  I hope you liked the post.