Out of the many Japanese konbini (convenience store) chains, one of my favourites is Lawson Japan.  Just like 7-11 this chain originally started out in the United States and is completely Japanese now.  Both chains are way better in Japan for the variety of offerings, especially the food and snacks.  There are plenty of sneak a peak videos on Youtube about konbini, but this post is all about the image Lawson is promoting about themselves and their food products. They've done some pretty nice marketing.
http://en.wikipedia.org/wiki/Lawson_%28store%29
http://lawson.jp/en/

Red Chicken / Chicken Nuggets (Karaage)
Fried chicken is a hot market segment in Japan.  Everyone has chicken drums or nuggets or skewers to bring in the old snack business into the store.  Kentucky Fried Chicken is popular, and even has a special affiliation for Christmas dinner. 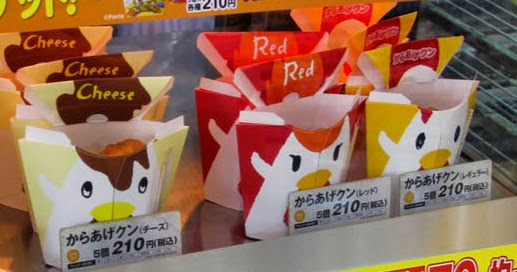 Lawson has yummy chicken nugget offerings too.  They have their regular, red, and brown chicken boxes (but they have run regional flavours for their chicken nuggets to - like Kit Kat does).  The chicken nuggets at Lawson in their distinctive chicken-themed boxes are rated as being pretty darn tasty, even by professional chefs like Anthony Bourdain. http://fightland.vice.com/blog/ottavia-bourdain-gets-lost-in-tokyo

Catchy tune with their Akikoloid singing about their fried chicken.

Oden (Stew)
This is a traditional Japanese dish and it bubbles away all day at front counter of the konbini in the winter months.  It is comfort food (might even remind you of your Japanese grandmother or mom if you have one) that full of veggies and different kinds of meat and seafood.  You choose what you want to eat.  More of their Akikoloid singing is shown below.  Wonderful that they have a vocaloid mascot to mingle along with the likes of Hatsuni Miku.  If you're wondering what a vocoloid is, check out my Hatsune Miku post here.

Akikoloid singing about their oden this time.

The grand opening of Lawson in Hawaii - includes a segment about oden.

Fresh Coffee
Everyone is also moving into the competitive, but lucrative coffee market.  The konbini all sell canned coffee that is both hot and cold already, but everyone is moving into fresh coffee to hammer away at Starbucks and McDonalds.  Looks good to me so I'd try it, although I'm really a Starbucks guy who also likes canned coffee!  It looks like coffee consumption is also rising in Japan, and part of it is thanks to all of the convenience stores now selling fresh brew.
http://asia.nikkei.com/Business/Consumers/Convenience-stores-new-coffee-hot-spot-for-Japanese