Japanese convenience stores are really pretty amazing from the variety and types of food and beverage products they stock to the quality of the food.  They are also everywhere near any type of business or transportation hub.  Since their introduction in the 1970s, based off of the American convenience store model, the Japanese konbini is really in a league of its own for now.
In the first half of 2017, it looks like 7-11 took the lead in market share from the other chains like Lawson and Family Mart in Japan, but the market space is still very competitive.  Despite their convenience (they are still pricier than supermarkets), expansion of these chains has slowed considerably in Japan due to market saturation and demographic issues such as an aging population with fewer young people.

The chains are now all looking to grow by expanding overseas, but they are also trying to grab niche markets at home at the same time by putting in snack stations in businesses to increase convenience and profits.  Snack stands may be as simple as a plastic display holding snacks and a payment box for cash to larger installations such as full vending machines that get restocked on a daily basis.

Lawson and Glico (as in the snack company that makes Pocky) both have the smaller stands / displays with Glico having done this for over a decade.  Family Mart is pioneering vending machines for fresh food and beverages.  They are found in train stations, airports, and larger businesses.  These machines vend both hot and cold drinks, room temperature snacks, and refrigerated fresh products.  It is the fresh products that kind of grab my attention as they stock everything from the 100 yen rice ball, salads, to fresh sandwiches (such as their yummy ham and egg salad sandwiches).  While vending machines with sandwiches and such are nothing new (you've probably seen them in cafeterias at work or at big schools), they work better in Japan because of:
Below are some pictures of the Family Mart machines at Narita airport. 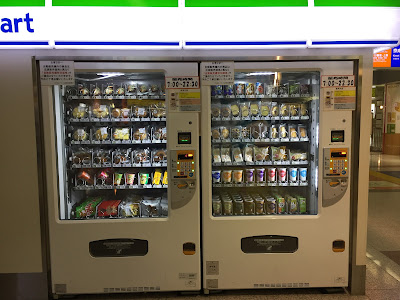 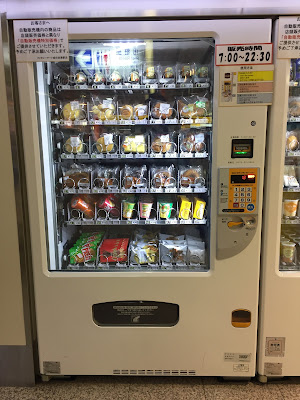 Just as a side note, the Yamazaki Bread Company also makes some amazing sandwiches with sweet to savory fillings that last for days at room temperature.  There is some kind of food preservation miracle at work here (some of which is also used in MREs) as this includes egg, tuna salad, and other meat sandwiches.  The sandwich packs actually taste pretty good too with nice soft bread going well with the various fillings.  These sandwich packs are apparently well dated to ensure freshness too.  I've seen at least one Youtube video that indicated that convenience store POS systems can tell from the bar code if something is past date, issue a warning, and they will not sell you the sandwich.  Pretty good system at work.

At the end of all of this, I can only say that options for a quick bite to eat are pretty good in Japan when you don't want to go to even a fast food outlet or a regular convenience store isn't available.

Follow me on Twitter a @Tostzilla or my feedburner for this blog.
More Japanese pop culture posts and ramen reviews