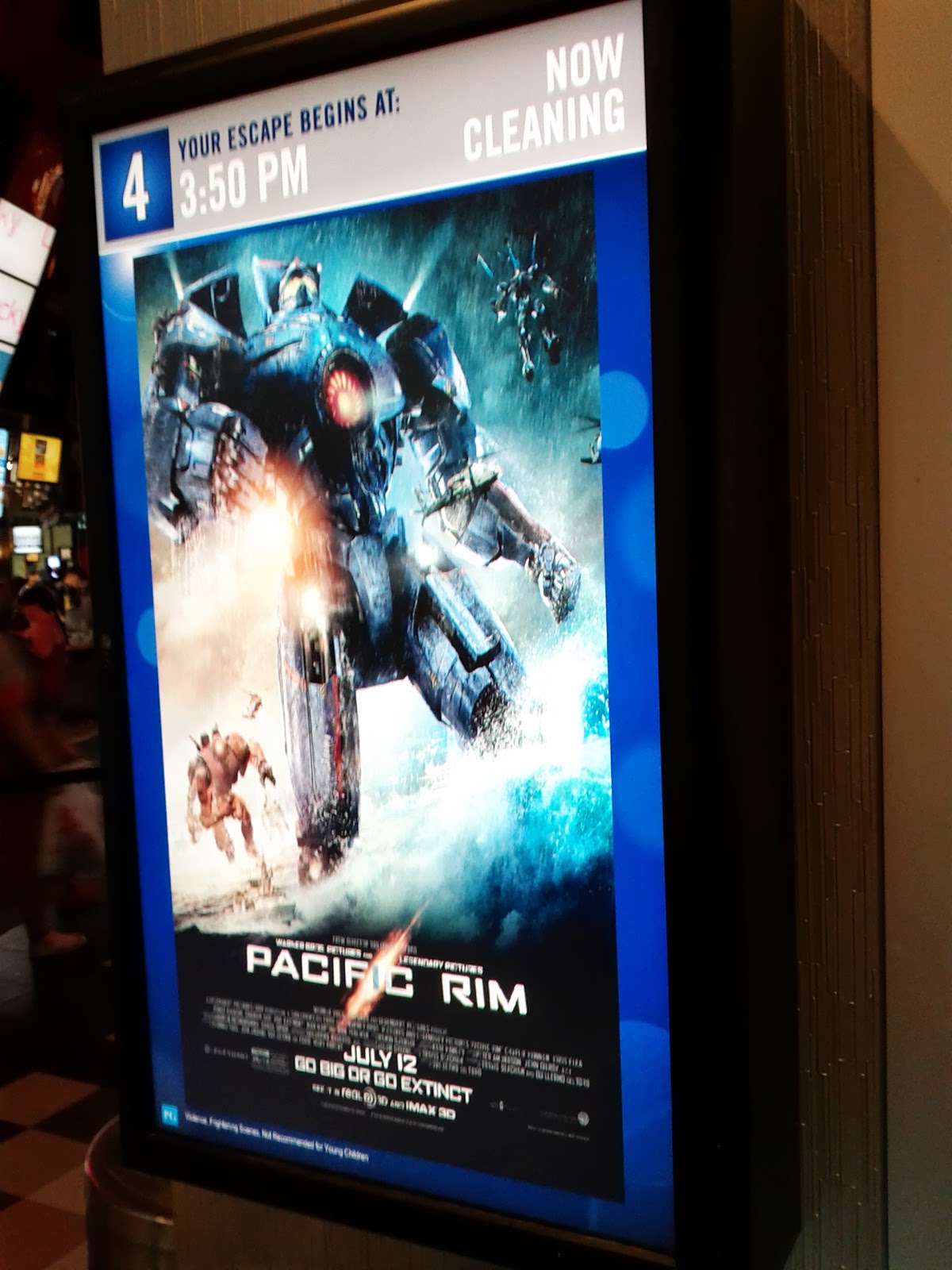 Director Guillermo del Toro has said that his upcoming movie sci-fi monster movie Pacific Rim was inspired by kaiju movies, but is an original work to bring something fresh to the genre.  It turns out he is a kaiju monster movie fan and I believe he said that The War of the Gargantuas was one of his favourites in one of the interviews.  Right now, a viral marketing campaign is running for the July 2013 release of Pacific Rim and all kinds of interesting news and images are being leaked to tantalize us.  Guillermo has done Hellboy and Pan's Labyrinth in the past - all movies that I liked - so I am counting down the days till this new movie arrives.  I don't see many movies in the theatre any more, but I'll make the effort for this one.

The trailers released to date show some really interesting footage.  I kind of like the fact that they have these giant robots run by two pilots each.  The pilots must work in a coordinated fashion to control the left and right sides via a high-tech VR and full body, feedback, control system.  You don't just sit in a control chair as you have to walk and move the robot with your body motions like you are wearing it.  I use a similar concept for my HARM mechas in my stories that I am writing for Exocrisis Blue.  From the first trailer it looked like the robots were remote controlled something I don't like as there could be jamming / datalink loss, so my pilots are in my mechas, but it turns out in the Wondercon Trailer that the pilots are in the head of the mecha.  The trailer shows the pilots setting up in the head, which then is lowered into place on top of the mech, just like in many super robot anime!  The Pacific Rim Jaeger mechas are a giant 25 stories in height and so are the monsters they fight.  They made six different mechas for the movie and ten different monsters too.  It will be interesting to see how they duke it out with weapons or hand to hand combat with giant rocket assisted punches and whatever else they devise.  The monsters look very nasty too.


I watched a few of the interviews below and found all sorts of interesting facts.
The synopsis of the movie's plot from Wikipedia is listed below and it sounds pretty good right now.
"Giant monsters identified as "Kaiju" arise from a crevice in the Pacific Ocean, resulting in a war which takes millions of lives and quickly consumes humanity's resources. To combat this new threat, a special type of weapon is designed: massive robots, known as Jaegers, which are controlled simultaneously by two pilots whose minds are locked in a neural bridge. As time passes, even the powerful Jaegers prove almost defenseless in the face of a relentless enemy. On its last stand and on the verge of defeat, the remaining defending forces of mankind have no choice but to turn to two unlikely heroes—a former pilot (Charlie Hunnam) and an untested trainee (Rinko Kikuchi)—who are teamed to drive a legendary but seemingly obsolete Jaeger from the early trials of the mechanical titans. Together, they must stand as the human race’s last hope against the mounting apocalypse."

While I am on the topic of Pacific Rim and giant robots I thought I would list six giant robot anime + Mechagodzilla as other source material about giant mechas who fight giant monsters.  The list isn't supposed to be exhaustive and if I've left off your favourite series it just means I needed to pick six anime that were  representative.  I also considered Gurren Lagaan, Argentosoma, Godannar, GoGaiGar, Giant Robo, Gravion, and Heroic Age amongst others.  My final list of anime with giant, over the top, mecha are:
Pacific Rim Information Links
Mechagodzilla
To start off the inspirational list of giant mecha that fight monsters anime is a non-anime.  Mechagodzilla is the human or alien developed weapon to counter the ultimate kaiju - Godzilla.  Mechagodzilla has gone through a few incarnations, but I'd say the latest movie version of it in Godzilla Against Mechagodzilla and Godzilla: Tokyo S.O.S. were my favourite versions.  Godzilla starts the list as Big Green has been with me since childhood and those wonderful, but now defunct, double-feature matinees on the weekend with popcorn and pop.

Mazinger Z, Great Mazinger, Mazinkaiser
Mazinger is the oldest anime on this list with a big heroic mecha fighting giant monsters.  It probably defined what a super robot anime was for a very long time.  Every week the robot would have to destroy one of Dr. Hell's minion beasts / machines. I watched this way back in the 1970s and it definitely inspired a ten year old.  One of my favourite super mechas with the rocket fist and heat beam.  These shows were full of action, heroic men and their heroic robots battling evil.  A classic, genre spawning series by Go Nagai that has had many later incarnations under the Mazinkaiser name.  These super robot shows are classics that always remind me of the line from Hitchhikers Guide to the Galaxy and about "...when men were men, women were women, and battlecruisers ruled the universe..."  These shows are also tongue in cheek, being a combination of humour with crazy fun.  The Youtube videos below show some nicely made fan CG.

Getter Robo
Getter Robo is a slightly later contemporary to Mazinger with the original having a good long run too at 52 episodes.  Getter Robo created the concept of the combining robot, where separate vehicles joined together in in different combinations to create a particular configuration of a super robot.  In Getter, the three heroic teenaged pilots defeat the Dinosaur Empire and their giant bio-mechanical machines bent on eliminating the pesky humans that are everywhere.  There was even a cross-over between Mazinger and Getter that I have never seen.  Getter Robo went on to spawn several more animated series and has a die hard fan following.  All other anime with combining mecha (including Gurren Lagann from what I read) have this show to thank.

Gunbuster
Gunbuster is an inspirational anime that changed the giant robot genre.  Gainax, the studio who made it, went on to create Neon Genesis Evangelion - probably the giant robot anime that the others are compared against.  In Gunbuster, the Earth is threatened by giant space monsters and the Gunbuster is developed to defeat them.  Elite pilots are trained and they must combine their ships to create the ultimate mecha - the Gunbuster.  Over a decade later, Gurren Lagann, was produced by Gainax in the tradition of the great super robot anime that preceded it with some nice new original twists.


Neon Genesis Evangelion
Evangelion is probably the classic giant mecha anime that has shaped the direction of this type of mecha anime for over a decade.  Fortunately I like it so this fact doesn't bother me too much, even if the teen pilots have way too much angst or other psychological issues.  Having too much drama in your stories is the "in thing" these days anyhow.  Only Gundam had this much influence on the real robot anime genre.  In this series, giant biomechanical mechas called Evangelions are developed to fight the invading Angels who have ravaged the Earth.  The series has giant bases, big robots that are sleek looking, and cool looking monsters.  Conventional weapons are useless against the Angels who have the AT Field, something that only Evangelions can counter.

Rahxephon
Rahxephon was a giant robot anime that I thought was pretty cool.  The mecha designs were original and characters were more normal than in some shows.  In this show, you find out that an ancient race called the Mu are sharing the Earth with us and they wish to reshape the world, disposing of humanity in the process.  They prepare for this by sealing off the greater Tokyo area in a massive spherical barrier called Tokyo Jupiter.  On the other side of the barrier, the UN is preparing to take the war to them.  The Rahxephon mecha itself was an interesting design that was both retro and modern and the opposing bio-mechs came in all shapes.  Still one of my favourite super robot anime.


Fafner
Fafner In The Azure is slightly later contemporary to Rahxephon.  This show is harder to get into, but the mecha and weaponry is definitely one up on Rahxephon. The story for this show has humanity fighting against the alien invaders called the Festum.  The Festum are giant, glowy humanoid like monsters that basically assimilate you and only the advanced weaponry deployed by the Fafner units can stop them.  I like the concept of a moving island base in this anime - one that looks like a typical Japanese island with town in fact.  Again, a typical trope in this show requires school kids to drive these big Fafner units, something that I am glad Pacific Rim is not doing (although I kind of use this trope for my Exocrisis Blue series in a good way).  Fafner had a pretty good story overall and a big battle at the end of the series so it went out with a bang.

Aquarion
Finally, I get to Aquarion, one of the latest anime in this genre with high production values.  It is an interesting anime with various super mechas (with different combat capabilities) merged out of different combinations of smaller mecha units called Vectors.  Merging to create a form of the Aquarion super mecha requires the pilots (known as elements) to merge their spirits / souls in a difficult process.  The Aquarion is one of the only weapons that is highly effective against the Cherubim Soldiers of the Shadow Angels who are invading the Earth.  There is plenty of mystical stuff in this show with a complicated back story about the current events continuing an epic, mythological battle that occurred 12 000 years ago.  People are being harvested to power the Shadow Angels and they need to be stopped.  I have mixed feelings about this show - especially the protagonist - but the mecha designs were cool.

THE END.  This was supposed to be a short post and it turned into a kaiju on me!  Hope you liked it.