The fifth day in Tokyo.  It has been a whirlwind of sightseeing so far and there are only a few days left.  It was a cool morning today and it was the day we had booked a couple of months in advance to attend the Ghibli Museum in Mitaka - about 30 minutes from Shinjuku Station if you hit the JR Chuo Line train and then the bus connection dead on.  This isn't likely to happen so it'll be 45 minutes to an hour of travel.
The trip out to the museum was pretty uneventful, but we did manage to glimpse Mt. Fuji from the train.  The train leaving Tokyo in the morning wasn't super busy.  Arriving in Mitaka, we hit a supermarket in the station for snacks and drinks and some food kiosks selling trays of special rice dumplings to eat down at the museum (there is an outdoor picnic area).

We caught the bus at the station (you can buy a cheaper round trip ticket at the machine there) instead of walking as it takes another 20 minutes to get there on foot for an adult.  If you're lucky, it'll be a bus with Ghibli decorations.
The Ghibli Museum is Studio Ghibli's celebration about the art of animation. Both adults and children will enjoy the exhibits on the craft of creating traditional (non-CG) animation.  You can also walk through some mockups of animator's desks and view many pieces of line art from the Studio Ghibli films.
The building itself is like a friendly old mansion with many little details from the various movies.  You'll find views out of windows into the background art of many of the films such as Kiki and Howl.  There are cute little cat taps in the big public sink.  Soot sprites peek out at you from many windows.  Three big attractions to the museum are the giant statue on the roof of the robot from Laputa (Castle in the Sky), the daily original short film of Ghibli animation that plays, and of course the giant cat bus that children can climb into and over to play on.  The gift shop here also has a great deal of museum-only Ghibli merchandise that you can purchase.  I've found some great stuff both times I've visited.  This time I bought a cat train, not a bus, from the Mei and the Baby Catbus short, and found another keychain with a Mei riding inside the baby catbus!

The only bad part to the visit was the fact that I had already seen the feature film showing that day before on my last trip here.  That's pretty bad luck as it was the water bug one, which is a good film, but I would have preferred seeing the one with Mei and the Baby Cat Bus.  I think there are nine films that show in rotation now so the odds were with me to see something new, but it just didn't work out.  There are no photos permitted inside the museum, but you can shoot in the outside areas.  Everyone has their picture taken with the robot below.
After the museum we took the train back the way we came and stopped off at Nakano Broadway at Nakano Staion on the JR Chuo Line.  Nakano Broadway is a small four story mall with many anime related stores on the second and third floors.  A large Mandarake store is here for used books, toys, and other goods - many of which are manga, anime-related, or classic toys.  They even have a shop that sells original film cels and many other expensive items of memorabilia.   The mall had a old school anime shopping feel to it, a bit like the old Radio Kaikan, but much roomier.  The mall area is a bustling place and it is full of shoppers.

I had never been here before and had a great time browsing and checking out the little shops.  There was a great Mandarake shop on the third floor selling old tin robots and big items of memorabilia (e.g. human-sized Evangelion).  On the second floor it was interesting to see a large Mandarake receiving area where people come to sell them their old books and collectibles.  Quite an operation they have here.  I've heard people say that some of the stores here have closed, but it did seem pretty lively when I visited and there was more than enough to keep us there for hours.

Some other Nakano Broadway links
After Nakano Broadway we headed back to Shinjuku Station.  It was getting close to dusk at this time and we also wanted to grab an early dinner and avoid the lines.  We ended up at Takashimaya Time Square for dinner at a tonkotsu restaurant there up on the restaurant floors on the 11th to 13th floors of the department store.  After dinner we went outside and walked along the east side of Shinjuku station to take in the bright lights of the entertainment district.  The streets here also close off to become pedestrian streets in the evening.  The sights, smells, and sounds just inundate you with sensation here.  The street signs, food displays, touts trying to get you to their restaurant or bar, and the constant crowd make it an unusual immersive experience if you don't come from a big city.

After looking at the lights we looked for a Tokyo Flash watch store that was supposed to be in Shinjuku Station.  After half an hour we gave up as no one seemed to have heard about it and information couldn't help either.  So much for a funky, techie watch - I guess I'll get it online instead!
After this we went to see Artnia, the Square Enix Cafe and Store at Shinjuku East Side Square.  This is an interesting office complex as you can see from the photo above (Mos Eisely anyone?).  It is a pretty good walk (I'd say 20 to 30 minutes) from Shinjuku Station so I took the Marunouchi Line subway to Higashishinjuku Station instead.  Follow the signs to East Side Square.  When I showed up I found out that is is closed on Thursdays - doh! So I would have to come back the next day.  However, the supermarket Maruetsu right across the street from it is well stocked.  I found the instant bowl ramen (Nissin Raoh) and many other treats here.  This is a good place to get snacks and ramen you won't find at a convenience store if you are in the area..  As it was strawberry season we also bought a bag of these mini-strawberries here and were they ever good!  Yum! 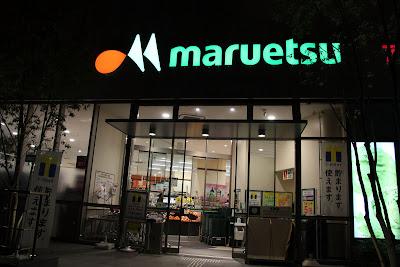 That night we had some pretty good snacking and eating back at the hotel and recuperated from a long day of walking.  Tomorrow is Ramen Day, when we visit both of Yokohama's awesome ramen museums and eat your fill to boot!