Vancouver Fun (With Japanese Goods Too!)

It's been a pretty busy summer 2012.  With some holiday time off from work I was able to write a novella set in my Exocrisis Blue setting, fly to Chicago, attend the Calgary Stampede, visit the Heritage Festival in Edmonton, and I just finished attending the wedding of a close friend in Vancouver.  Obviously I've been keeping the blog up too.  Going to need a holiday from all this...  :)

I haven't been to Vancouver in about ten years and the wedding was a great opportunity for me to catch up with friends, family, and see some sights!  There are a great many Japanese restaurants and places to buy Japanese goods in Vancouver - it was quite surprising as I hadn't researched it all that much.  The flight out was pretty uneventful and there were some great views of the Canadian Rocky Mountains from the plane.
After landing at Vancouver International, we rented a car and drove downtown to visit Robson Street and Grandville.  We started by taking a look at the Pacific Centre Mall area where we checked out Vancouver City Centre and the Art Gallery.  If you don't have a car it is pretty easy to get here by Skytrain from the airport.  This area is nice on a sunny day and bustling with people.  Robson used to be pretty interesting over a decade ago but it isn't anything like that any more.  It still is a nice part of town to browse and shop but you have more of the chain stores occupying it.  Still, there are some interesting shops at either end of the street.  Caught a really good sale at the Sears that was closing down - I wonder what will replace it.
We then wandered down to the Public Library Building which looks like a modern Roman Colosseum.  Let the games begin!  There were food trucks here and at the Vancouver Art Gallery.   They filmed the Arnold Schwarzenegger film "The 6th Day" with the library as the Replacement Technologies Headquarters.
A little ways down Robson going NW is a pretty funky block of good eats with an Asian / Japanese theme.  There is Gyudon Ya, a beef bowl diner (500 Robson Street), Beard Papa, a sushi shop and the Japadog diner.  Wanted to stop to eat here almost but we wanted to see more of Robson first.  This block of good eats is between Richard and Seymour Street.
Way down on the other end of Robson was a pretty darn good Japanese sushi restaurant called Miko Sushi (1335 Robson Street) where we did stop for lunch and it was yummy!  Also nearby is a place called Konbiniya Japan Centre (1238 Robson Street) where you can buy all types of Japanese food with sushi and onigiri to go.  They have an excellent selection of Japanese candy and snacks of all types.  Many candies and snacks were purchased, including canned coffee.
We wrapped up late in the afternoon and went to my friends wedding in West Vancouver later that evening.  It was a perfect day for a wedding along the seashore where you could see the Lions Gate Bridge and Stanley Park across the inlet. Very awesome views.
The next day we did the walk along the waterfront in West Vancouver along a very nice trail as you can tell from the pictures below.  Lots of nature.  My friend has seen eagles and all sorts of wildlife here. 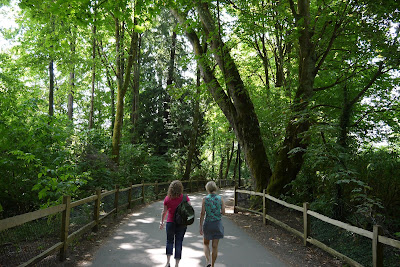 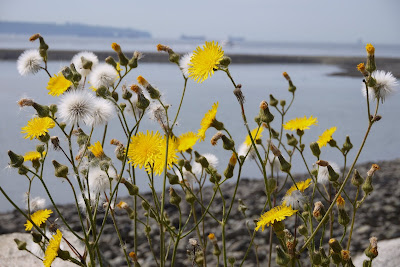 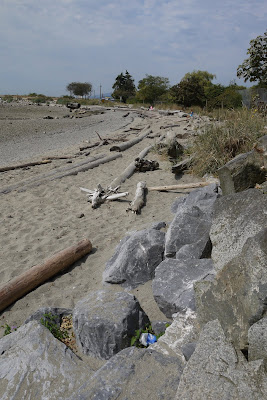 We then went to Richmond to visit Aberdeen Centre, a large 3 story Chinese mall. The traffic out was awful, but the mall met expectations and we easily spent three hours here shopping and eating at the food court (all Asian food from tonkatsu cutlets to beef brisket or Chinese BBQ on rice).  There are all types of Japanese toy stores and candy stores here too.  Best of all, there is a big Daiso (2 floors of $2 and up merchandise - pretty much like the 100 yen Daiso in Japan) and it was great!  Bought lots of stuff from stationary, origami paper, decorations, various supplies, canned UCC coffee to Japanese snacks.  I even managed to find a couple of nice big ramen bowls ($8 each) to replace one I broke while doing the dishes.  There is also a nice Japanese pottery shop in the mall too where we picked up a very pretty plate that looks like the surface of a pond with goldfish swimming in it.

All too soon it was time to head back.