I blog a great deal about Tokyo and Japanese pop culture related items, but I'm based out of Edmonton.  This particular post done in the spirit of fun, and in the style I would compose a post about Tokyo travel, to highlight some of the cool things that are worth seeing or knowing about my home city.  Yes, I know Edmonton is nothing like Tokyo, and I would never seriously compare the two.  So read on and enjoy this short article.
When is the best time to visit Edmonton?
Summer of course, if you don't want to bring a parka.  I don't even really want to be here in the winter.  Summer is glorious, with long days as the sun rises early and doesn't set until 11 PM.  There is usually lots of sunshine and it is great for barbequing.  Summer is when Edmonton also has great festivals, you can enjoy long walks in the various parks or along the river valley, and eat and drink on the patios at restaurants and bars.

Churchill Square, City Hall, AGA, and Downtown
The Taste of Edmonton and other events are held down in Churchill Square, a very nice town square in front of City Hall.  All cities need a civic space that is something like this at their center.  City Hall is also quite interesting with its big glass pyramid and clock tower.  In Tokyo, the metropolitan city hall building would hold the entire square inside its top outdoor level, but that building is HUGE.  The city has done a nice job making it lively during the day.  Do visit the Art Gallery of Alberta while you are here.  The AGA often has some very cool exhibits on, some of which would be at home in the Mori Museum in Tokyo.  If you like the AGA, the Provincial Museum may also be worth a visit.


Districts to Visit
I'd be writing about Shibuya, Shinjuku, or Akihabara for Tokyo normally.  In Edmonton, you visit Old Strathcona and 124 Street for some outdoor shopping, arts, eating, and walking.  If you are planning on going to the mountains and are on 124 Street, Mountain Equipment Co-op is a great place to get gear without having to look for a sale as they are a co-op.  I get most of my gear here.

Old Strathcona is chock full of places too eat (including some affordable Italian at Chianti's) and plenty of little shops to explore.  Up on 124 Street there are some very nice galleries, more shops, great Greek food at Koutouki, and of course the Duchess Bakery (was listed as one of the best bakeries in Canada).  Farmer's markets seem to be springing up everywhere and there are supposed to be three in Edmonton's downtown / Old Strathcona.  The grand daddy of farmer's markets is the one in Old Strathcona.
http://www.duchessbakeshop.com
http://osfm.ca
http://oldstrathcona.ca
http://www.124street.ca
http://www.mec.ca

West Edmonton Mall is big enough to be its own district as it is one of the world's larger malls.  I'm putting the mall in this section as it is worth seeing if you have never been there for Galaxyland, the waterpark, and just to look around.  The T & T supermarket is a great place to shop for Asian foods or even to get a quick meal.  If you are collecting toys, anime, manga, and comics you can visit the following stores there: Comic King, Chapters for a large selection of manga, HMV for the city's best selection of anime, Comex Hobby, Collectors Edge, West Edmonton Coin and Stamp.  http://www.wem.ca

Festivals
Bloggers make a big deal out of the various summer matsuri (festival) in Japan.  They are definitely fun and you can visit the temples / concession stands there, but Edmonton can hold its own for summer festivals.

The big one I look forward to every year is the Heritage Festival, which is a huge multi-cultural affair with booths and tents being set up by various cultural associations for what seems like every country on earth (it isn't of course, but it is a BIG festival in August).  There are demonstrations of crafts, ethnic dance, music, other arts, shopping for nicknacks, and of course you can eat yourself silly.  There are many other festivals such as the Fringe Festival for theater, the Street Performers Festival, Canadian Finals Rodeo, Jazz Festival, etc. K-Days with the big fairground and the Taste of Edmonton  also run at the same time.  Taste of Edmonton brings 50+ local restaurants together to showcase the food they can prepare.
http://www.edmontonjournal.com/entertainment/festivals/Food+fans+expected+flock+Heritage+festival/10075187/story.html
http://www.heritage-festival.com
https://www.fringetheatre.ca
http://k-days.com
http://tasteofedm.ca


Seeing Gardens
Don't miss the Muttart Conservatory for the different biomes they have under their pyramidal glass atriums.  It is a very nice place to visit and you can even stroll down to the riverside from there.

The Devonian Gardens south of the city are beautiful and they have a great Japanese Garden too.http://www.devonian.ualberta.ca
http://www.edmonton.ca/attractions_events/muttart-conservatory.aspx


Transit / Trains
Tokyo has trains, bullet trains, and then more trains.  I like trains - they run better than buses.  We have the LRT or light rail transit.  It is interesting that both Calgary and Edmonton get their rail cars from the same company in Germany, but the trains are different.

Right now, one main transit line serves the city, but more are coming.  Only the Churchill Square Station and the the Southgate Station are anything like a Tokyo train station as they connect underground or are very close to malls and other amenities.  Southgate is my favourite as you have department stores, shops, food court, and supermarket within a few minutes of the stop (even though the city and the mall operator couldn't quite get agreement to bridge the 40 feet or so between the mall and the station).  Corona Station downtown is worth a mention as it allows you to exit up to trendy 104 street with all of its nice restaurants, a Sobey's, 7-11, and weekend farmer's market (do check it out for a meal if you are in the area).
https://www.facebook.com/4thStreetPromenade


History
You can visit the Royal Alberta Museum (the provincial museum) to get a great overview of the human and natural history of the province.  For a more immersive experience with pioneer history, a visit to Fort Edmonton Park is recommended.  You can see many original buildings from the 19th and 20th century and actors bring it to life.  A working steam locomotive will take you around the grounds.

Speaking of old trains, you can cross the High Level Bridge by old street car from Old Strathcona to downtown.  There is even an old Japanese trolley car that was in operation in 2012, but is now undergoing maintenance.
http://www.edmonton-radial-railway.ab.ca/highlevelbridge
http://www.royalalbertamuseum.ca
http://www.fortedmontonpark.ca


Provincial Legislature
Edmonton is the provincial capital of Alberta.  The large sandstone legislature building just had the dome refurbished.  It is an impressive building with free tours and the grounds are very pretty.  The reflecting pools in front of the building often have people wading around in them, especially on Canada Day when it is a zoo.  There is also a massive below ground set of public tunnels here that can be a bit of fun to explore! 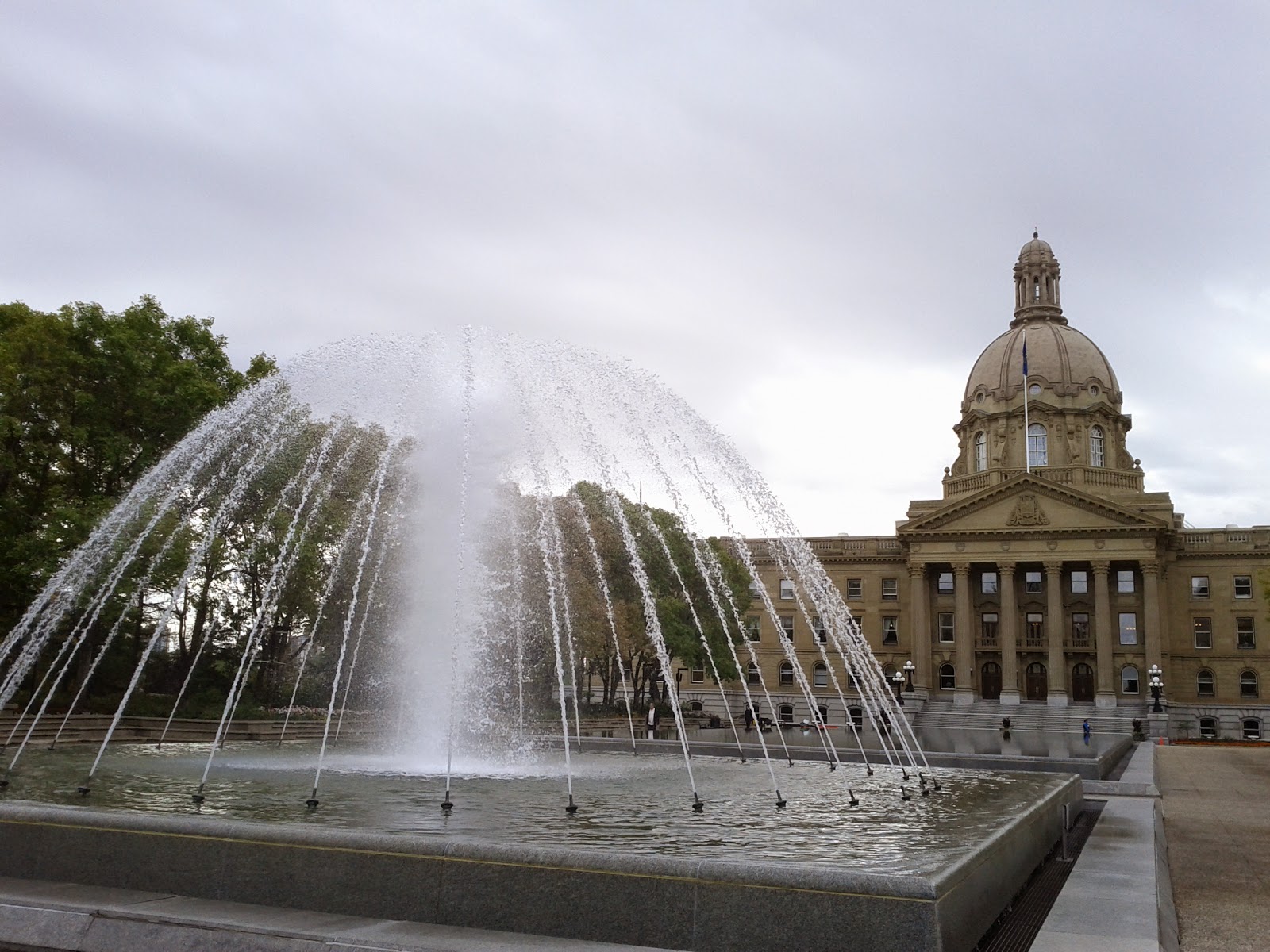 Comics / Anime / Science
Anime and manga are one of the things that allowed Japan to have a massive soft power cultural export that has influenced generations of film makers, children, and adults.  We Canadians have mounties, bears, beavers, maple syrup, and the fact that we're usually friendly (mostly harmless).  However, Edmonton does have a number of places to shop for anime goods, comics such as Happy Harbour, and Warp One.  There are several big hobby shows too (with the big convention down in Calgary as the Calgary Comic Expo).
The Telus World of Science should also be checked out as they do have a variety of very interesting science exhibits.  They also have hosted fantastic exhibitions such as the Harry Potter and Star Wars Identities.
http://www.popculturefair.com
http://edmontonexpo.com
http://telusworldofscienceedmonton.ca

You can get all types of things like lamb burgers, gourmet sandwiches, poutine, Vietnamese, and many, many more.
http://www.whatthetruck.ca
http://streetfoodapp.com/edmonton


Chicken for Lunch Experience
There is always a line here for her Chinese food in the Scotia Place food court at lunch.  Amy is famous for there "crack" chicken which is a very tasty fried chicken in little strips / nuggets.  I like curry Thursdays myself, but they also have spicy Fridays, and Butter Chicken Wednesdays.  They have a syndicated show called The Quon Dynasty on TV or on Youtube, etc.
https://www.facebook.com/CFLEdmonton


Convenience Stores / Dollar Stores
The Japanese convenience stores or konbini are just better in terms of the food offerings and snacks.  7-11 has upped their game here for snack foods, but I'd say the Japanese version is still better.  However, we do have slurpees!  Daiso and some of the other 100 yen stores are pretty sweet for the types of products they offer back in Japan (or Vancouver), but Dollarama is the closest you'll come here to that with some decent offerings.  Our big drug stores kind of fill a niche between konbini and supermarket as some of the big London Drugs or Rexalls have pretty good selections of everything, including snacks.


Instant Noodles
No Ramen museum here, but I will mention that Edmonton does have an instant noodle plant in the form of Noodle Time.  I prefer Nissin myself (out of Japan or Hong Kong - not USA).


Recycling
Edmonton is awesome at recycling and you don't need the crazy 5 different bins and extra education required in Tokyo.
http://inhabitat.com/worlds-first-waste-to-biofuels-plant-opens-in-edmonton-canada
http://www.edmontonsun.com/2013/10/25/edmonton--is-the-city-of-recycling-champions


End
Give Edmonton a visit if you're in the area, or pass through on the way to the Rockies via Jasper.  There is also some cool architecture too in the city too, but I'm not really going to cover that.  As a parting picture, the Kaye Clinic reminds me a bit of the Tokyo International forum in this image. 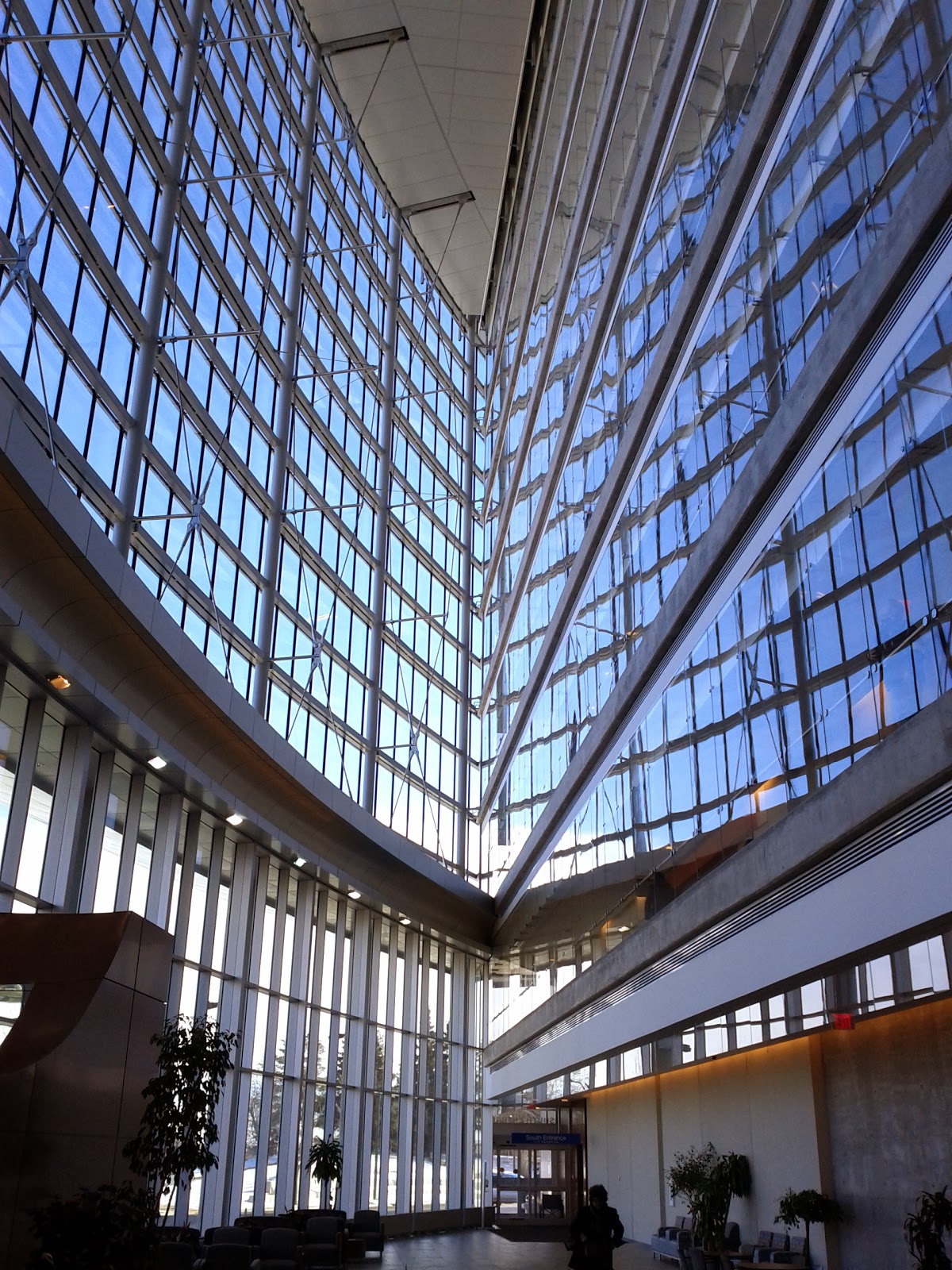 Other travelogue posts for Japan, Canada, and more.