Nissin Hong Kong has been making pretty good instant noodles there for a long time.  I remember when Doll Ramen was the only game in Hong Kong before they were bought out by Nissin Japan in the late 1980s.  Doll Ramen is still making noodles, but Nissin HK is now the number one brand in Hong Kong.  Nissin HK makes localized products for the Hong Kong and export markets.  Many of the products are imported into Canada, making these noodles available at Superstore and many Asian supermarkets.


One of the more recent products from Nissin HK is the black garlic Tonkotsu ramen flavour of instant noodles.  This flavour was first introduced as a packaged noodle block and is a really tasty version of tonkotsu.  The extra black garlic paste foil pouch really improved on the original green packages of tonktosu noodle blocks that were out.  On a side note, the green packages of tonkotsu noodle blocks now come with a seasoning sauce pouch and not just a powdered soup base which has amped up their flavour too!

When I first saw the Black Garlic Tonkotsu ramen bowls I only thought I should buy like four of these as I knew I liked the flavour of the packaged noodles.  The bowls always come with a nice satchet of extra toppings for the noodles which I like too.  I was wondering if they were a limited edition product, but it turns out they aren't and the world is a better place because of this.


This variety of noodles is a favourite in my household,  The black garlic oil adds a rich and savoury burnt garlic undertone to the soup that has a hint of smokiness.  The regular tonkotsu soup base is a lightly creamy soup that is smooth, has a mild aroma, with a decent flavour, but the oil makes it so much better!  The corn and naruto adds a nice little bit of variety to the noodles.  The noodles themselves are the typical noodles found in the Nissin HK noodle bowls.  They have a decent chew and bite to them, but don't let them soak too long in the broth.  This is a tasty bowl of noodles and well worth trying out if you never have.


I had this particular bowl of noodles for lunch one day and it wouldn't actually be a full lunch for me.  Fortunately I also had a salmon rice ball or onigiri from T&T to supplement it.  The rice balls are decent from T&T, but the filling is mixed throughout the rice, making them different from a konbini in Japan. 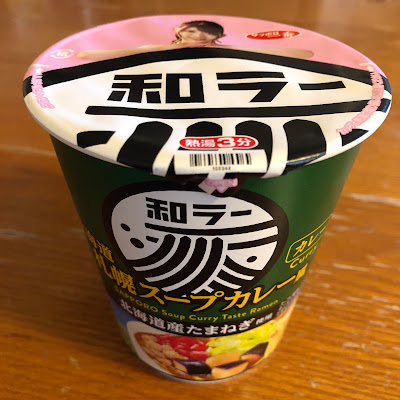