Shinjuku's Underground Labyrinth (or The Tunnels of Shinjuku)

I was sick of the rain on a damp, rainy morning on my last trip to Japan.  It had rained for four days out of seven when I was there, with two days of solid rain.  The early morning wasn't so bad, but it was raining fairly steady after visiting the giant Godzilla head on top of the new Toho Cinemas in Shinjuku (more on that in the next post).  I decided to go underground to dodge the rain and do a bit of subterranean sightseeing. 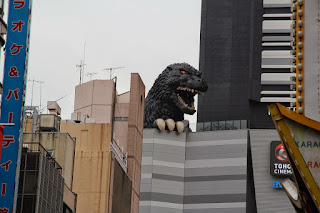 Shinjuku Station itself, one of the largest and busiest train stations in the world is a maze too (see Shinjuku Dungeon app), with over 35+ platforms, but the maze extends far beyond the station.  Shinjuku has a large set of tunnels that connect Shinjuku Station to the Tokyo Metropolitan Government Building and many of the other buildings on the west side of the station.  These range from entire underground malls to kilometres long underground tunnels, some of which are just utilitarian, and some are pretty nice looking.  I would visit a number of the office towers I wanted to take photos of and stay much dryer by doing the mole person routine.

I started around the north west side of the station near the big circular concrete hole in the ground there for the buses and roads.  The Shinjuku Eye art installation is in this area and it is giant yellow eye that watches passers by on the concourse.  It is animated and pretty darn cool, kind of reminding me of the Eye of Sauran a bit.
The tunnels near the eye are the larger tunnels.  The southern tunnel that goes west/east has a moving slidewalk that takes you towards the Tokyo Metropolitan Offices, while the northern tunnel that goes west/east here also has a slidewalk that takes you towards Shinjuku Station.  These tunnels are basically like wide underground streets that have shop fronts and entrances to the the buildings on both sides of the street.
I popped up above ground to take photos of the Gakuen Cocoon Building then went underground to the lobby of the Sumitomo Bank Building.  The building is triangular shape from above and is hollow in the middle.  With the light shining straight down and the rain water, it looked like a kaleidoscope and something out of Blade Runner.
I then went looking to the north of this building for the Shinjuku NS building which was in the wrong place when I originally Google mapped it.  The building is just south and east of the Tokyo Metropolitan City Hall Towers and is hard to miss as it is a big square blocky building.  Still, misfortune can work for you and I explored some interesting looking buildings and some really long underground tunnels.
I then went south to the Tokyo Metropolitan City Hall and visited the large Tourist Center there for some brochures and went up the free elevator to the observation deck on the 45th floor of the building (there is one in each of the twin towers, but only one is open at a time).  Tokyo City Hall is a behemoth of a building with a massive courtyard several floors above street level, and it extends several levels below the street to boot.  It is city hall for like 25 million people though, so you're looking a state level government headquarters.  The governor here is the most powerful official in Japan after the prime minister.
After this I walked across on the courtyard level to the south over an overpass and under a roadway above me (a pseudo tunnel) to reach the Shinjuku NS building.  It is amazing how many different levels the buildings around here operate on.  You might think you are at ground level, but you aren't.  It is a truly monumental type of architecture and environment that could only exist in the largest cities.
The Shinjuku NS building is a large office building with two floors of restaurants way up on the 29th and 30th floors.  The building has a massive atrium inside and a walkway that crosses it on the 29th floor.  This was something I wanted to see as I had seen pictures of it before.  There is an express elevator to the restaurant floors.
The views from it were pretty nice for City Hall and some of the office towers in the area.  After this went out the south side of the building back through a small courtyard that had some nice casual restaurants ringing it and back into the tunnels that lead east back to Shinjuku Station.  On the way I stopped at a electronics store and had a look around for iPhone cases.
It was an epic circular journey underground to and from Shinjuku Station and I stayed fairly dry.  It was a good way to explore things and kill several hours.