The plan was for a nice day trip out from Tokyo to Kamakura on the coast.  There would be brilliant red autumn leaves to see at the beginning of December, visits to ancient temples and shrines, and maybe some time to walk the beach.  I originally had a really ambitious schedule that included doing everything we saw today, a walk on the beach, and the island of Enoshima.  During planning, when I was working out travel time, time to enjoy the sights, and rest times, I realized that the beach and Enoshima had to go.  You could do this in a dawn to night kind of day, but you wouldn't have much time at each site visit, and you would be running a marathon.  My feet don't last that long either these days.

Why visit Kamakura?  Well, it was the capital of feudal Japan when the Kamakura Shogunate was established from 1192 to 1333.  This means that there were plenty of funds in the area to build and expand shrines and temples that have survived for over seven to eight centuries since the fall of the Shogunate. 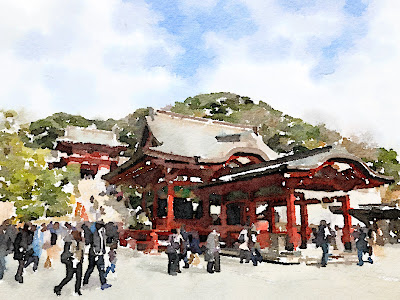 Kamakura is kind of like a little miniature Kyoto for shrines and temple, plus countryside charm, even though most of the place is a small city.  Kamakura city is on the seashore, but you have to make a slight side trip to go to the beach if you're on a temple sightseeing schedule.  The place is famous for the beaches and there is also the nearby island of Enoshima which is also fascinating to explore as it is supposed to be the home of Benzaiten, the goddess of music and entertainment.

The area has been made pretty famous in a few movies (one of which is Our Little Sister) and anime.  Anime such as Minami Kamakura High School Girls Cycling Club (Kamakura), Slam Dunk! (Kamakura Kokomae Station), Tsuritama (Enoshima), Katana Maidens (Kamakura), Hanayamata (Kamakura), Tari Tari (Enoshima), Elfen Lied (Kamakura - Gokurakuji Station) are some of the anime set here.  Love Hina is also set in Kanagawa Prefecture, which Kamakura belongs to, but Hinata House located at the fictitious hot springs town of Hinata (near Fujino?).  Next time I'm in Tokyo I'd definitely make another day trip out here again as there was still more to see and even some places to revisit.  The area is crowded with Japanese tourists, who know it well, but it there is also a significant number of foreign tourists in the area too!
The Great Wave off Kanagawa, a very famous ukiyo-e wood block print, is also set in the sea off of Kamakura city.  This print is also one of my favourite works of art by Hokusai.  Some interpretations of this work think this is a tidal wave, but I'd say it is just a big old wave, agreeing with the overall consensus on this.

Kamakura is just over an hour from Tokyo Station, with a direct train via the JR Yokosuka line, where it takes you through Yokohama to Kamakura Station in the middle of the city, and the round trip is $20.  We caught the train from Shimbashi Station after 8 AM and arrived at Kita-Kamakura Station in less than an hour.  We even scored seats!  More and more people got on the train the further south we went and they were all out to see the fall colours in Kamakura.

Engakuji Temple
Our day was pretty packed, so the itinerary I planned minimized back tracking.  We got off the train at Kita-Kamakura, one stop before the main stop at Kamakura Station.  From here we would have an easy walk towards Hachimangu Shrine and the center of the city.  Best of all, there were two famous temples on the way.  Engakuji Temple was basically right outside the train station and it was our first stop.  The morning was cloudy with bits of blue sky, but the skies cleared as the day went.  The temperature was in the low teens, perfect for walking outside with a jacket.

There were a good number of people here and there were many people taking pictures of the red maple leaves right outside the front gate.  It turns out this temple is very popular for autumn leaf photos.  I found out that my keys were missing when we arrived and I thought I might have accidently locked them in my luggage. Still, this only put a slight damper on the morning as there are always ways to remove little travel locks.  That evening I searched the room and found I had kicked them under the bed during my morning preparations - oops!  Just inside the front gate, at a rest area, I stopped to have a can of hot coffee and a couple of rice balls as I had skipped breakfast to get down here on an earlier train.

Engakuji is one of the most important Buddhist temples in Japan and it is #2 of Kamakura's five great Zen temples that was founded in 1282 (almost 8 centuries ago).  It is as big as Kenchoji and has equally beautiful buildings.  Some of the timbers in the buildings look absolutely ancient.  The temple is has a holy relic, a tooth of Buddha, and is dedicated to soldiers who fought off the Mongol invasions of Japan.

Kenchoji Temple
It was a 15 minute walk to Kenchoji from Engakuji on the sidewalk along a well travelled road.
Kenchoji is the oldest Zen temple in Kamakura and #1 of the five great Zen temples here. This temple was founded by the Kamakura Shogunate regent in 1253 (over eight centuries ago).  The founding would show just how pious and wealthy the regent was and the first priest was from China.
Over the centuries the temple has shrunk in size, but it is still very impressive.  The Hatto or main hall is my favourite part of this temple with its impressive mural of a dragon surrounded by colourful draperies hanging all around it from the ceiling.  This hall is the largest wooden hall of this kind in eastern Japan.

Tsurugaoka Hachimangu Shrine
It wasn't a very long walk to the Shinto shrine, Hachimangu from Kanchoji (seemed like ten minutes and it was all downhill too).  We entered the shrine from the top of the hill where the main hall of the shrine is, saving us a walk up.
Tsurugaoka Hachimangu is a big shrine that covers a wide area.  It is Kamakura's most important shrine that was founded in 1063 (almost 1000 years old), but it was moved to its site here by the first shogun of the Kamakura Shogunate.  The shrine represents the power of the ruling family and is dedicated to Hachiman the war god of the ruling Minamoto family.

This is a busy shrine that attracts over nine million visitors every year and it is especially busy during the New Year holidays with two million visitors who are doing their first shrine visit of the year (Hatsumode).  There is also and samurai archery competition held here in April and September.
After seeing the main shrine building, we went down the main stairway to the lower part of the shrine.  Here there is the Maiden, a building that houses a dance stage and ceremonial area.  While we were they we witnessed a traditional wedding with odd sounding musical instruments playing along.  To the left of the maiden is a large offertory wall with casks of saki and cases of beer.
Dankazura Street, a long and wide, stately pedestrian walk, runs through the center of the city through several torii gates to the front entrance of the shrine.  From the top of the shrine you can see all the way down this walk all the way to the waterfront where it starts.  A block to the west of this street is the busy Komachi shopping street that is chock full of shops and restaurants.
After walking from the shrine, we had been on our feet for more than a couple of hours and it was lunch time.  It was either eat a little early or have a really late lunch after more sightseeing.  We decided on an early break.  We stopped at a restaurant near the Kamakura train station on Komachi Street for Oyakudon, chicken and egg rice bowl.  We had a lunch set and it was delicious.

This post concludes in part 2 which covers the Great Buddha of Kamakura and several other places.

Follow me on Twitter a @Tostzilla or my feedburner for this blog.
More Tokyo / Japan Travelogue Posts.