This Shinji, Rei, and Asuka Tonkotsu Cup of Noodles is the fourth and final review of the Evangelion Instant Noodle Cups series.  I believe this cup noodle is the star of the series as it is the only one with a printed lid that features an Evangelion unit, and it also has the three main pilots featured on the front of the cup.  In the Myojo press release it is also the main cup that is mentioned as follows "Evangelion and Charumera collaborate! Meisei Charmera Cup Evangelion Tonkotsu Soy Sauce."  This cup noodle should have a very savoury and rich note as it is both soy sauce and pork bone flavour.  What makes this cup extra special is the additional garlic flavouring and the addition of fried garlic chips to the soup.  This all sounded pretty good to me so I saved the best for last!  On a side note, I mentioned that end of episode 12 had Misato taking the pilots out for celebratory ramen, but you only hear the orders for Rei and Asuka, so I hope Shinji ordered this one!

The Evangelion 3.0 + 1.0 or Evangelion 4.0 movie never released this summer.  Delayed, it will release in the future, but the movie tie-ins released anyways.  Myojo released four cup of noodles this summer that uses their black cat mascot as yet another angel. There are four flavours - shoyu, miso, tonkotsu, and shio, each with their own character cups.  I'm always happy to see movie / franchise tie-ins like this and I managed to order one of each to get a complete set.  These are limited edition cup noodles and they sell out pretty quick.  There have been a few reviews of these, but they usually go with the Rei, Shinji, and Asuka Tonkotsu version, but I'm working the other way by trying the Shinji and Kaworu Shio (Salt) Ramen first.  These ramen come in a pretty standard set of flavours, but I'm always game to try them out. 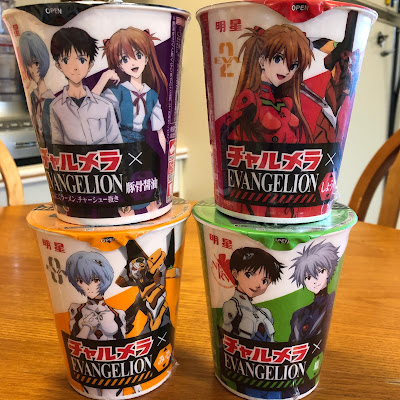 Lifting the lid after adding the boiling water and waiting three minutes released a nice savoury garlic smell.  All of the toppings and the ramen rehydrated nicely and I stirred the noodles and soup to make sure all of the soup powder was dissolved.  The colour of the soup was a nice tannish colour and quite appealing.

A taste of the soup confirmed it was a nice savoury soy / tonkotsu broth that had a good garlic element to it.  The noodles had a nice firm chew and were a slightly thicker regular noodle.  The menma still had a nice texture and were slightly chewy like they should be.  The naruto was a nice decoration and were like naruto!  The garlic chips on the other hand were intensely garlicky.  I actually thought they were quite strong and they definitely added some zing to eating these noodles.  In end, this was a good tasting cup of noodles and with a definite difference with the garlic and the garlic chips.