Kowloon Walled City Writing about two fascinating places today.  One isn't Japanese, but is in the Hong Kong of the past.  What is their connection? Both were abandoned ruins at one point, and the now demolished Kowloon Walled City of Hong Kong (along with the busy Kowloon streets) were inspiration for the futuristic streets of Tokyo in the Ghost in the Shell anime movie by Mamoru Oshii.


Kowloon Walled City was tightly packed development of apartment buildings that were connected by narrow streets, alleys, and a myriad of passages.  The place was even a bit off limits to the police.  Very neat to look at in photos and such, and probably pretty unnerving to enter if you were not a resident. It looks like a place that was very easy to get lost in with no GPS signals possible even if there were pocket GPS systems back then.  A book called City of Darkness was published about the city.

After a little research I found one web site that I had visited over ten years ago, but is now defunct.  Fortunately, the Internet Archive has a copy of it.  This website chronicles the visit of a Japanese expedition (go figure!?!) that visited the Walled City prior to its demolition.  The story was pretty fascinating and can be found here: http://web.archive.org/web/20020208225753/http://www.flex.co.jp/kowloon/story/index_e.html

Another site I found was the site with the amazing cross-section image from the book published by the Japanese expedition.  And large image of the cross-section and other information can be found at this website: http://mein-home.blogspot.com/2011/12/kowloon-walled-city.html

April 2103 Update:
New link to Gizmodo who has recently published an excerpt from the South China Morning Post to recap the 20th anniversary demolition of the City of Darkness.  It also shows that thousands of people lived there and made great friends and connections when they were poor.  The SCMP article will probably disappear behind a paywall, but it has an awesome cross-section / infographic of the city.

Gunkanjima or Battleship Island
Hashima Island or Gunkanjima Island was the location of a small town built on a speck of land to support a coal mine that finally played out economically in the 1970's.  The place is now deserted and looks hastily abandoned as the company moved everyone off the island.  There were schools, hospitals, many apartment blocks for the miners and their families, and all types of services on the island. Just the other day I realized what fascinated me about the abandoned place - it looks like the abandoned Chernobyl city pictures without the radiation from that horrible reactor meltdown.  Flickr has many images of the island taken by foreign and Japanese photographers.  There are books on Amazon.co.jp that are only about the island.  http://en.wikipedia.org/wiki/Hashima_Island

Recently, the James Bond movie "Skyfall" seemed to feature a deserted island that looked very much like Gunkanjima, but it was actually an island off of Macau with sets inspired by the real thing.  The real island itself is quite small and the buildings are really packed in. 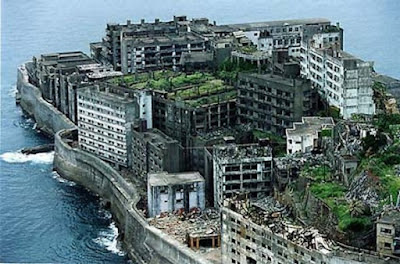 Here is a link to a blog page where a guy took a tour of the island.  Kind of interesting reading.On it is the name of tour company called Seaman Shokai (株式会社シーマン商会; TEL: 095-818-1105)
in Nagasaki that took him there.  Another link to Gakuranman's blog some very nice photos of the desolation.

Also of note is this excellent historical article about the island from Cabinet Magazine.


I wonder if there were many novels and such set in either setting.  It would have probably made for some fascinating reading.  Also have a look on Youtube for some movies about both of the places.

April 2013 Update:
Rocketnews went out to the island with a Sony Corp. camera crew and took some really nice photos and even some new remote drone footage of the place.  Cool.