JAL Inflight Food (they even did Air MOS Burgers)

Unless you're going by boat, you have to fly by plane to get to and from Japan (no rockets, airships, or flying mechas unfortunately).  JAL has been rated pretty highly for service and food by a number of magazines and websites.  I've never flown them myself (kind of stuck with Air Canada as I don't live near major hubs like Vancouver or Toronto), but their very well presented meals sure have me wanting to try them out.

JAL has been doing some cross-promotional deals with some Japanese food chains for their in-flight meals for some time now.  The first item that caught my eye was from Monocle magazine where they ran a little blurb about JAL serving up an Air Mos Burger for a limited time in 2011.  What you say!?!  Burgers in Space - or at least in the air!  Since then, they have introduced other types of appealing and nicely presented food for their passengers.

Right now as part of their JAL Premium Economy International flights they are partnered up with Soup Stock Tokyo to bring you some more fabulous looking meals for a limited time. Soup Stock Tokyo Website.
There is a French meal and a traditional Japanese meal.  The Japanese meal uses fresh seasonal ingredients, while the French meal serves up a hot Croque monsieur [ham, cheese] sandwich.  Both are packaged up in the very nice serving trays / kits that won a design award. 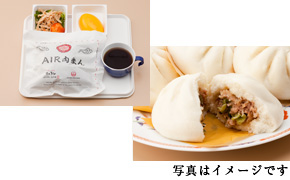 There is also a yummy looking Chinese pork bun "meat bun air?" meal running right now that was jointly developed a famous and popular Yokohama Chinatown restaurant. I love the translation from Google that comes through as: Please look forward to! "Hot! Plump" of meat bun with plenty of feeling of the season prior to arrival destination. 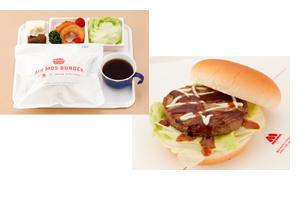 Last year, from June through August 2011, they ran the “Air Mos Burger” in-flight meal set. Mos Burger is Japan’s homegrown answer to McDonald's (Mos Burger Website http://www.mos.co.jp/english/).  This burger meal had you assemble your own in-flight burger with lettuce, buns, hamburger patty, teriyaki sauce and mayonnaise from a hot kit. My favourite thing about this "air burger" is the fact that it come with a double-sided instruction sheet that tells you how to assemble your teriyaki burger in detail.  See a closeup of the meal and the instructions at Flickr here.