Mainly by accident, I've bumped into a few of the historical locations where events in the 47 ronin happened.  I'm not going to re-document the story about the 47 ronin so I've taken the highlights of the story from Wikipedia for this article. 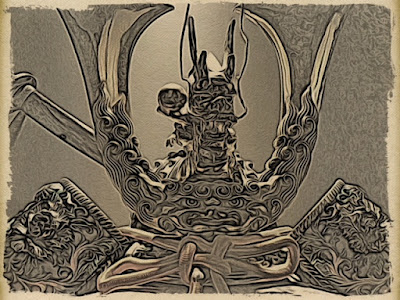 "The revenge of the forty-seven rōnin (四十七士 Shi-jū-shichi-shi, forty-seven samurai), also known as the Akō incident (赤穂事件 Akō jiken) or Akō vendetta, is an 18th-century historical event in Japan in which a band of rōnin (leaderless samurai) avenged the death of their master. The incident has since become legendary.

The story tells of a group of samurai who were left leaderless (becoming rōnin) after their daimyō (feudal lord) Asano Naganori was compelled to perform seppuku (ritual suicide) for assaulting a court official named Kira Yoshinaka, whose title was Kōzuke no suke. After waiting and planning for a year, the rōnin avenged their master's honor by killing Kira. In turn, they were themselves obliged to commit seppuku for committing the crime of murder. This true story was popularized in Japanese culture as emblematic of the loyalty, sacrifice, persistence, and honor that people should preserve in their daily lives. The popularity of the tale grew during the Meiji era, in which Japan underwent rapid modernization, and the legend became entrenched within discourses of national heritage and identity. ... Fictionalized accounts of the tale of the Forty-seven Rōnin are known as Chūshingura. The story was popularized in numerous plays, including bunraku and kabuki."
The 47 ronin incident starts in April 1701 in the Great Pine Corridor of Edo Castle, which has since burned down and not rebuilt.  Lord Asano Naganori drew his sword and attempted to kill Kira Yoshinaka who had insulted him.  There was a law that forbade the drawing of swords inside the castle and another law that said there was to be equal punishment for quarrels.  However, only Asano was sentenced to death by seppuku, while Kira received no punishment.  There was no proper investigation into the affair, the Asano estate was also confiscated by the shogun, and the family line removed from the nobility.   Asano's now master-less samurai or ronin then decided to avenge the injustice of their masters death.  This story is all about the loyalty, honor, and sacrifice of the retainers - all important characteristics to the Japanese.
Prior to visiting the remains of Edo Castle, I didn't know that the story of the 47 ronin had started here in central Tokyo.  You can read about my visit to the imperial palace east gardens here.  After Asano's death, his retainers knew they were going to be watched to ensure they did not commit any acts of revenge over the matter.  The ronin dispersed to avoid scrutiny and secretly plotted for revenge against Kira, but not against the shogun.  Two years later they attacked Kira's mansion in December 1702 and killed him.  They took Kira's head to Asano's grave to let their lord know that justice had been served.  Afterwards they turned themselves into the shogunate and were sentenced to death by seppuku too in February 1703.

My first encounter with a location associated with the 47 ronin was in the Gion district of Kyoto, which is some two hours and 20 minutes from Tokyo by bullet train.  In Gion, there is a teahouse (ochaya) named Ichiriki which is now over 300 years old. These ochaya were places for the wealthy and powerful to be entertained by geishas.  Ichiriki is famous as Oishi Kuranosuke, the leader of the 47 ronin and former chief retainer (chamberlain), laid low here while he plotted revenge.  The ronin realized they would be monitored, so Oishi had a cover here as a drunken gambler who had fled away.  Ichiriki is right on the main street through Gion, so it is pretty easy to spot this red teahouse and it is a pricey place to attend still.

My last location I personally visited that crossed paths with the 47 ronin was in the Yanaka district in north central Tokyo.  I stumbled across Kannonji Temple, which also has a dedication to the 47 ronin, as they met here to plot their revenge for their master.

Finally, there is the grave of the 47 ronin at Sengakuji Temple in the Shinagawa district of south central Tokyo.  This is where the story of the 47 ronin ends.  Lord Asano Naganori and his loyal ronin are buried here in this Buddhist temple.  Every year on December 14, there is a ceremony/festival conducted here to commemorate the anniversary of their successful revenge, and there is also a museum here dedicated to them.  A statue of Oishi Kuranosuke, the leader of the 47 ronin, greets visitors when they enter the grounds.
There will be many other locations involving the 47 ronin all over the greater Tokyo area, but these are just a few of the places I have found.  So if you're into the legend, there are places to visit.