When I was deciding to visit Japan I did a pile of background reading and was researching the museums over there as I have a big interest in archeology. Well, I started coming across these interesting images of the famous "Dancing Haniwa" and amazing clay figures of women called dogu.  Well, these images are also embedded in the Japanese pysche and are hold great interest for the Japanese too. On my visit to Tokyo I made a trip to the National Museum to see these wonderful artifacts and was not disappointed!  These wonderful neolithic and early bronze age clay figures from Japan rank right up there with my love of Minoan art (look at the pottery and snake goddess figurines from my page on the Minoans).
Haniwa ( 埴輪 )
The "Dancing Haniwa" are these clay figure that look like cactuses with arms in dancing type poses that are part of a whole range of different types of haniwa figures (you have horses, other animals, figures playing harps, figures that even look more human, etc.).

As a total side note for you anime figure collectors out there - just imagine what an archeologist a 1000 years from now would think about the piles of PVC figures they would excavate out of the ruins of your home if the world as we knew it ceased to exist. A shrine for ritual purposes?  Royal burial? A storehouse? Who knows... Maybe I'll leave a clay tablet explaining what they are or something myself :)  And yes,  the title of this blog post says "Alien Art", so you will eventually see the dogu and the clay vessels made by the Jomon people which are very alien looking.

Haniwa means "circle of clay" in Japanese.  Haniwa are unglazed terra-cotta (low-fired) cylinders or hollow sculptures that where arranged on and around the mounded tombs (kofun) of the Japanese elite from the Yayoi period. The kofun keyhole tombs dot the Japanese landscape today and are quite cool too. The origin of haniwa started during the latter part of the Yayoi period around the Kingdom of Kibi. A great big, and famous, kofun tomb is located at Sakai city.

Yayoi Period
The Yayoi period lasted from about 400 or 300 BC until 250 AD. This period followed the Jōmon period and completely supplanted it. This period is named after Yayoi town, the subsection of Bunkyō, Tokyo, where archaeological investigations uncovered its first recognized traces.  The start of the Yayoi period marked the influx of new practices such as weaving, rice farming, and iron and bronze making on a wide scale. Bronze and iron appear to have been simultaneously introduced. Iron was mainly used for agricultural and other tools, whereas, bronze was used for ritual and ceremonial artifacts.

The first and most common haniwa were barrel-shaped cylinders used to mark the borders of a burial ground. Haniwa range from 1 to 5 feet (30 to 150 cm) in height with most being approximately 3 feet (90 cm) high. Originally, the cylindrical type haniwa were set on top of the funeral mounds, so it is believed that they had a purpose in funeral rituals; however, as the haniwa became more developed, they were set towards the outside of the grave area, and it is thought that they were used as boundary markers to mark the borders of the gravesite.

There is a theory that the soul of the deceased would reside in the haniwa, as the earlier haniwa were placed on top of the funeral mounds. There are haniwa that are equipped with weapons and armor, and these are also thought to be containers for souls. The armor and weapons would serve the purpose of driving away evil spirits and protecting the buried ruler from calamity. Because the horse and animal shaped haniwa were normally neatly arranged into a line, it is believed that they were part of a sending-off ceremony."  Summarized from Wikipedia

Today, the haniwa are not quite so serious as they are part of popular culture and have embedded themselves in commercials and even video games.  Still, there are many depictions show the haniwa as a ghostlike, malevolent creature too, particularly in video games.


Dogu ( 土偶 )
Dogu are bug-eyed clay idols that represent women with these exaggerated features like big hips, thick legs, and nipples as fertility symbols.  Compare these to other fertility figures such as the Venus of Willendorf for exaggeration of features (no relationships implied either).  Dogu are found all over Japan with the Tohoku region in northern Japan yielding the most variety.  Dogu first appeared in early Jomon period and became common in the Middle Jomon through Late Jomon.

Dogu figures are not simple figures. Many have the distinctive Jomon rope-cord patterns and / or have been intricately carved with patterns. Some look like space men from outer space with the bug or goggled eyes.  Apparently they are even known as the "goggles type"! These figures definitely make my imagination act up. 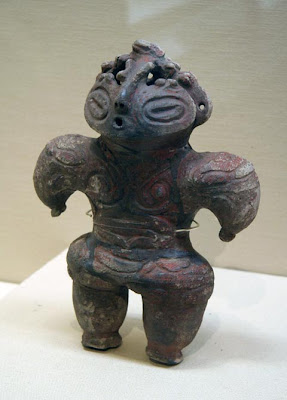 One of the most interesting things about these figure are the goggle-like eyes. No one knows the meaning for this exaggeration (and I'm not going to suggest alien contact - even if it looks like a space suit to us).   The nose and mouth are usually small holes. The clay figures have a crown on their heads and the incised patterns could be tattoos?"  There are many different patterns, shapes, sizes for these figures too.

There are over eighty sites in Japan where Jomon pottery vessels have been found, but the majority the finds come from the later periods.  Weaving was still unknown at the time and clothes were often made of furs. The Jomon people started to make clay vessels, decorated with patterns made by impressing the wet clay with braided or unbraided cord and sticks. Based on radio-carbon dating, some of the oldest surviving examples of pottery in the world can be found in Japan dated to the 11th millennium BC (this is disputed).


The majority of Jomon pottery has rounded bottoms and the vessels are typically small. This shows that the vessels would typically be used to boil food, perhaps fitting into a fire. Later Jōmon pottery pieces are more elaborate, especially during the Middle Jōmon period, where the rims of pots became much more complex and decorated.  In fact, these pots look positively organic in nature like giant pitcher plant or something even wilder.  All Jomon pots were made by hand, without the aid of a wheel, the potter building up the vessel from the bottom with coil upon coil of soft clay. Summarized From Wikipedia
The name Jōmon itself means “rope-patterned”. This refers to the impressions on the surface of the pottery which were created by pressing rope into the clay before it was fired.
http://earlywomenmasters.net/masters/jomon/
http://www.metmuseum.org/toah/hd/jomo/hd_jomo.htm
The power of dogu: ceramic figures from ancient Japan

There is a very nice PDF brochure of a continuously inhabited Jomon site at the link below.
http://sannaimaruyama.pref.aomori.jp/english/index.html

As I mentioned earlier with the Haniwa, these dogu figures have also entered Japanese pop culture in the form of videos, games, and television programs too.

The opening title sequence of the Japanese TV show "The Ancient Dogoo Girl." You can find episodes on Youtube, but I'm not showing them as it is pretty sexist stuff with lots of emphasis on breasts.

I like the show in concept otherwise as it is about "...the socially awkward teenage son of a bumbling archaeologist who finds a strange breastplate buried in the woods. When he places his palm on the breast plate, its design gets burned into his palm and awakens a girl named Dogu-chan, a hyperactive yokai hunter from the Jomon period. Because he had touched her breastplate, Makoto is now bound to Dogu-chan as she adapts to modern day life, forcing Makoto to go with her as she fights yokai in magic armor along with her animated Dogoo statuette companion Dokigoro while slowly prying Makoto out of his shell, whether he likes it or not." From Wikipedia.