Tokyo Coffee Shops
Tokyoites love their coffee and they have a long tradition of coffee brewing.  So it isn't just about green tea, which is also a great beverage.  Myself, I love a good cup of coffee in the morning to wake me up.  There used to be thousands of small coffee shops but these have been mostly displaced by bigger coffee chains, konbini stores, family restaurants, and the convenience of canned coffee from vending machines.  Still, you don't have to have a coffee at a Starbucks and there are several local Japanese coffee chains to try for something with some Japanese touches.  An unusually designed Japanese Starbucks (not in Tokyo) is described at the end of the post.
Two of the larger Japanese chains in Tokyo are Tully's and Doutor.  Both have their own specialties and many of the specialty coffees that Starbucks has.  Starbucks is pretty good too and it is the coffee shop of choice to watch the Shibuya Scramble Crossing from.  Pricing is within similar ballparks too.  Their coffee shops can be found in many locations around the city, sometimes it seems on every street corner.  Remember that the non-smoking environment in Japan is not the same as it is in North America, and if you want smoke free you might need to try Starbucks.

Tully’s operates under license from the American Tully's.  Tully's has items such as Tapioca Royal Milk Tea and Cream and Honey Lattes / Tea.  There are other seasonal products and even food specialties like sandwiches and other sweet pastries. Everyone does breakfast too and Tully's offers a delicious looking open face sandwich with melted cheese and bacon.

Doutor Coffee also offers all the coffee specialties, an excellent Green Tea (Matcha) Latte, a very pretty looking seasonal Cherry Blossoms Latte, delicious looking sandwiches, cake, and pastries.  If you are in Tokyo for any bit of time you'll have time to try them all!  Doutor also operates the Excelsior chain of coffeeshops that have a different food and beverage lineup.  The Excelsior coffee chain is also operated by these folks.

A more exclusive and hand crafted coffee can be obtained from Omotesando Coffee.  It is located in Omotesando and they have had many writeups on the web and in Monocle magazine.  Expect to pay more for the quality!  Their very minimalist web site is below.  You need to mouse-over to activate the menus!
http://ooo-koffee.com/

Hario Pour Your Own Coffee
Yes, this is a Hario from Japan, not a Haro as in the ball shaped robot in Gundam.  I use one of these at work whenever I don't want to leave the office to grab a coffee.  Works great and sometimes I wonder why I'm waiting in a line at the coffee shop (other than to stretch my legs or for a change of setting) because the coffee comes out great from my Hario coffee filter - often better than the coffee shop! 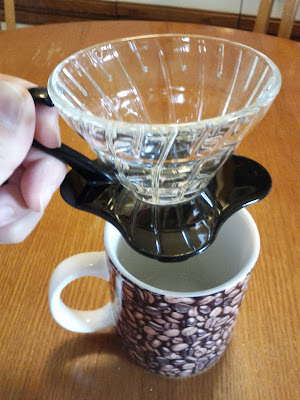 A difference between the Harios and other filters lies in the fact that the paper filters are perfectly conical, not flattened at the base.  This and the guide channels provide for a better flow of  water through the grinds so you get nicer coffee.  You do have to go through a few steps to make the coffee and you have to be a little patient, but it pays off.  The Harios are made from glass or ceramic and come in small and large sizes.  If you buy one, get lots of filters as they tend to have an erratic supply chain outside of Japan and cost more.  Kappenbashi (Kitchen Town) has coffee supply stores where you can load up on Harios and the filters cheaper.

Canned Coffee
Canned Coffee from a vending machine that is hot or cold!  Canned coffee (缶コーヒー kan kōhī) is ubiquitous in Japan, with a large number of companies competing fiercely and offering various types for sale. Japanese canned coffee is already brewed and ready to drink. It is available in supermarkets and convenience stores (コンビニ kombini), with vast numbers of cans being sold in vending machines that offer heated cans in the autumn and winter, and cold cans in the warm months.
Canned coffee is a Japanese creation, and the term kan kōhī is wasei-eigo: the English-language term "can coffee" was created in Japan and is believed to have entered English usage as a way of distinguishing it from a typical can of, for instance, Folgers or Nescafé. In the United States, at least, "canned coffee" is the preferred term, if used at all.


UCC Ueshima Coffee Co. is well known in Japan for pioneering canned coffee with milk in 1969. The official government web site of Shimane Prefecture, Japan, claims that the world's first canned coffee—Mira Coffee—appeared in Shimane in 1965, but this was short-lived. UCC does some excellent Evangelion canned coffee tie-ins - check out my EVA coffee page.  More significant perhaps was the 1973 introduction by Pokka Coffee of the hot and cold drink vending machine. The Japanese Wikipedia version of this article claims that it was this introduction that allowed the industry to take off, and in 1983 canned coffee makers shipped more than 100 million cases.  From Wikipedia.
Anyhow the various canned coffee companies have spent a fortune marketing their products, which do taste pretty good too, and you can enjoy a few of the Tommy Lee Jones commercials for Boss above.

Starbucks by Keno Kuma in Fukuoka
This Starbucks is on the street that leads to Dazaifu Tenmagu shrine. Kuma designed the shrine to blend in more with its traditional surroundings, yet look modern. Long pieces of lumber that were 6cm square in diameter were used to simulate the branches of a forest and suggest traditional Japanese carpentry techniques.  Anyhow, the store is very unusual looking and you can have a coffee in a nifty environment there.
http://www.spoon-tamago.com/2012/02/23/starbucks-in-fukuoka-by-kengo-kuma/